Much ado about methane. The climate alarmist lobby is up in arms today after the Trump EPA finalized new federal rules governing methane emissions from oil and gas industry sources. The New York Times and other mainstream media outlets – fed their talking points by the climate alarm community – have portrayed the new regulations as a complete rollback of environmental protections enacted during the Obama era, but this is utter and complete nonsense.

While the new regulation will certainly be easier for the industry to comply with, what it really does is eliminate duplicative rules and processes. As Bernard Weinstein points out in a good op-ed at The Hill this morning, most oil-producing states have strong emissions regulations of their own, rules that mandate periodic inspections and the use of best available technologies designed to curb emissions. The Obama EPA – staffed mainly with people supplied by the climate alarm community – intentionally designed its 2016 rules to be duplicative in an effort to make the rules as burdensome as possible for the industry.

Weinstein also correctly points out that emissions from the oil and gas industry account for less than 3% of overall U.S. emissions, and that the Obama Administration’s hyper-focus on this relative pinprick of the problem was intentionally punitive in nature. He also points out that industry emissions today are essentially unchanged from a decade ago, even though U.S. oil and gas production has doubled over that period of time.

And guess what? Industry emissions are way down this year because production has dropped thanks to the COVID-19 impacts. With drilling levels at a fraction of what they were just a year ago, we can expect the industry’s emissions to continue to rapidly fall for the forseeable future regardless of what the EPA does or does not do.

In other words, all the media and climate change alarmist rhetoric about this issue amounts to a lot of sound and fury signifying nothing of real substance.

But that’s no surprise now, is it?

Meanwhile, in other, real news…

There’s a storm on the horizon. Andrea Leinfelder reports in the Houston Chronicle today that a tropical depression is headed into the Gulf of Mexico and its projected track places a bullseye on a Galveston landfall by Tuesday. 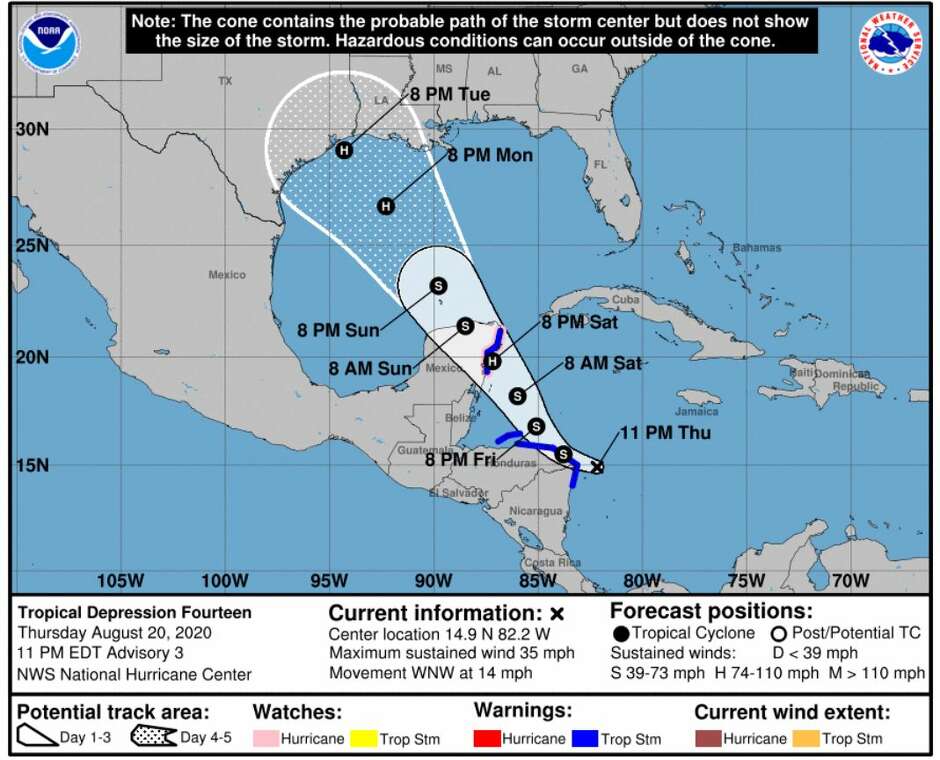 Tropical Depression 14 is currently projected by the National Weather Service to make landfall as a tropical storm, but anyone who has lived in Texas for the last 63 years as I have knows that these August/September Gulf of Mexico storms have a way of strengthening very rapidly. In any event, this storm is going to impact the heart of the Gulf of Mexico over the next several days, and will result in a large amount of platform evacuations and shut-in production.

It’s a big Fracking deal. Grove City College professor Paul Kengor has a good op-ed piece this morning about how Joe Biden’s pick of Kamala Harris harms his chances to carry Pennsylvania in November. Kengor points to Harris’s repeated promises to ban fracking as a real problem in a state whose economy has benefited greatly from being the center of the Marcellus Shale development.

Words matter. President Trump campaigned in Pennsylvania yesterday, and in his speech he ripped the Democrat nominee as being “no friend of Pennsylvania.” The President pointed to Biden’s own repeated promises to ban not just fracking, but the use of oil and natural gas entirely if he is elected to the presidency.

That’s all for today. Have a great weekend.