Stand and deliver! These words coming from one of the desperate men blocking your way mean it is time for you to get to work. The talkative one gets the first barrel of your 12-gauge shotgun; the one closest to him gets the second. Drawing your revolver, you go to work on the remaining would-be bandits. Holstering your empty pistol, you step down from the wagon, shuck the empty shells from your shotgun and smile for the camera as your friends post photos of your San Antonio Western Shooting (SAWS) adventure on Facebook.

If you live in or have visited San Antonio, you no doubt have seen the Alamo, visited the River Walk and taken in the theme parks. Now what? And where are all the cowboys?

SAWS gives you a chance to learn what it was like to be a part of the Old West: a storied time and place burned into the hearts and minds of residents and visitors alike. You may have grown up on classic westerns, but what was real and what was movie magic? SAWS gives you the opportunity to learn not only how to use those iconic Old West weapons but why they were important to folks in the Old West, and especially to Texicans.

SAWS has been providing clients with a safe and authentic western shooting experience since 2011. Sessions are conducted on a private “Old West” range near Alamo City. Keep in mind, this is not a show — SAWS clients do all their shooting using a variety of classic guns.

The organization utilizes “cowboy” firearms designed or manufactured prior to 1898. Guns include modern copies of Colt 1873 Peacemaker revolvers, double-barreled shotguns, and lever-action Winchester Model 1866 and 1873, and Marlin 1894 rifles. All revolvers and rifles fire pistol-caliber ammunition in either .38 Special or authentic black powder .45 Colt. SAWS ammunition closely mimics Old West velocities, which are considered mild by modern standards. It is fun to shoot, and you’ll shoot a lot of it.

You may be thinking, This is for beginners, and I am an experienced shooter. Well, it ain’t so! This experience was designed to have something for everyone, from the beginner to experienced shooters. There are fun trick-shooting challenges: a little friendly competition mixed with some history. SAWS guns are simple to shoot but are very different from modern firearm design. 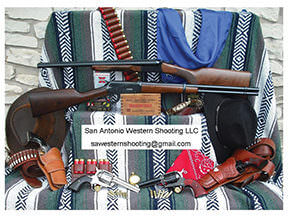 All SAWS clients get one-on-one instruction and some practice. Once you gain confidence in your shooting ability, you’ll deal with stage robbers, a crooked card dealer, and marauding Comanches, among other challenges. Absolutely no Hollywood horseplay, fast-draw, or fanning are permitted. SAWS clients shoot real guns using real bullets under controlled conditions. The organization follows National Rifle Association (NRA) and Single Action Shooting Society (SASS) range and firearms safety protocols at all times.

To date, SAWS has hosted visitors from 26 foreign countries and almost every state in the U.S. Many clients have never handled, or even seen, a real firearm before signing up. The hundreds of overwhelmingly positive comments (and photos) posted on TripAdvisor and Facebook speak to their experience.

SAWS staff members include retired military officers and senior noncommisioned officers, firefighters, paramedics, two attorneys, a nurse and one dentist. Staff members are competitive shooters and all hold multiple training, range safety and instructor certifications from the NRA and SASS.

Sessions are by appointment only. SAWS is a small business that has a love of old guns and the Old West, but the proprietors are also retired. Making reservation requests at least 30 days in advance is recommended. Shoots start at 10 a.m. and generally last about two and a half to three hours. The minimum age for shooters is 11. To ensure safety and a quality experience, sessions are usually limited to a maximum of eight shooters. Experience the Old West today at San Antonio Western Shooting.

For more information or to make reservations, contact San Antonio Western Shooting at [email protected] or 210-213-9812, or visit www.sawesternshooting.com.