For many decades, the Organization of the Petroleum Exporting Countries (OPEC) harbored the ability to control the price of crude oil on the open market, due mainly to the influence of a single member country — Saudi Arabia. Since the 1950s, Saudi Arabia has been blessed with a wealth of excess oil production capacity, which allowed it to turn millions of barrels of oil production per day on or off in a matter of days — in turn, causing the price of crude on the open market to rise or fall almost on a whim.

The U.S. shale industry was reminded of this precarious arrangement in 2014 when Saudi Arabia’s oil ministers decided to attempt to recapture market share by essentially flooding the market with additional crude. Neither U.S. producers nor any other oil-producing country had any effective response to that strategy, and the industry is only now beginning to recover in earnest from the price collapse that resulted from the oil glut.

But now the Saudis are no longer alone in having an excess of production capacity. That was the message delivered at a recent conference by Nansen G. Saleri, former head of Reservoir Management at Saudi Aramco. According to Saleri (who is now the Chairman, CEO and co-founder of Quantum Reservoir Impact), oil producers in the Permian Basin currently have between 500,000 and 1 million barrels a day of idle oil production capacity combined. By comparison, Saudi Arabia’s current spare capacity is about 1.5 million barrels a day, according to data compiled by Bloomberg.

Of course, the mere existence of excess capacity does not mean Saleri’s analysis is an apples-to -apples comparison. Where Saudi Arabia’s oil ministers are able to determine their nation’s overall production and export levels through central planning, hundreds of companies independent from one another determine the Permian’s production output based on their own internal decisions and on market forces. As well, the Permian basin currently finds itself in a bit of a constrained situation due to a shortage of pipeline takeaway capacity. Thus, one of the reasons for the Permian’s current excess capacity is that there are hundreds of drilled wells that have not yet been placed into production. 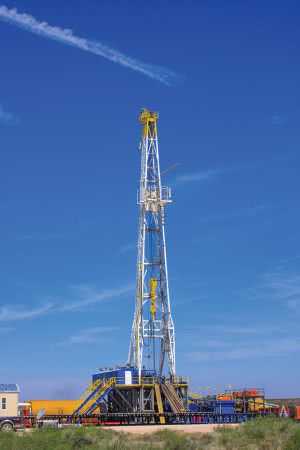 But still, the industry in the Permian region is currently very healthy relative to the previous three years, and comparisons to Saudi Arabia are not without merit. That aforementioned market recovery began in mid-2017 as the price for West Texas Intermediate, which had fallen as low as $42.53 per barrel on June 21, embarked on a steady rise throughout the final two quarters of 2017. That rise continued into early 2018, eventually reaching $66 per barrel in late January, a level not seen in almost four years.

One of the most interesting aspects of the recovery is that it has been largely centered in the Permian, a vast swath of West Texas and Southeast New Mexico that is roughly the size of the state of South Carolina. An examination of the data behind the DrillingInfo.com daily rig count from July 1, 2017, through January 31, 2018, shows that, while the rig counts in other basins such as the Eagle Ford Shale and the Williston Basin fell slightly or remained static, the count in the Permian rose from 359 to 421 rigs, an increase of about 18 percent. Combined, the rig count in the state of Texas amounted to almost 60 percent of all active rigs in the United States as January came to a close, with the Permian alone playing host to 40 percent of the national count.

This disparity in performance by basin becomes even more pronounced when forecasting future production growth. The U.S. Energy Information Administration is predicting that overall oil production in the United States will grow by about 600,000 barrels per day during 2018, with about 400,000 of those barrels per day coming from growth in the Permian alone. Even though the January 31 rig count of 421 is still well below the Permian’s recent high of 492 (in July 2014), drilling times have been cut so substantially and recoveries of oil from each individual wellbore have risen so dramatically that overall production from the region continues to accelerate.

The announcement by Pioneer Natural Resources Company on February 7 that it has decided to divest all other assets in order to focus exclusively on the Permian Basin confirms what many have already known: the Permian truly is America’s “Super Basin,” or as I like to call it, “Saudi Texas.” When I interviewed DrillingInfo.com’s Chairman and former CEO, Allen Gilmer, last summer, he expressed his belief that the oil and gas reserves contained within the producing formations beneath the Permian’s desert landscape are “virtually inexhaustible,” and that we should “look at the Permian Basin as a permanent resource.” Where Pioneer is concerned, it isn’t as if the assets the company plans to divest are just your basic oilfield garbage: they include roughly 70,000 acres of prime acreage in the Eagle Ford Shale region, where Pioneer was an early and very successful player. Indeed, for about five years, that Eagle Ford acreage was the company’s feature resource play.
Pioneer is a company that possesses a strong record of success in whatever area it has produced; thus, its decision to focus exclusively on the Permian is strong testimony to both the magnitude of the resource available in that region and the prime economics offered by prolific oil and natural gas formations stacked one atop another throughout a vast region larger than that of South Carolina.

The timing of Pioneer’s announcement is interesting, released on the same day that Halcon Resources Corp. announced a $381 million acquisition of over 22,000 acres in the Delaware Basin part of the Permian, and just a few weeks after Oasis Petroleum Inc. announced its own 20,000-plus acre entry into the region.

Just a week prior to Pioneer’s announcement, oil giant ExxonMobil Corporation announced its plans to triple production from the Permian over the next five years. This dramatic surge in focus on the Permian is the centerpiece of ExxonMobil’s planned $35 billion increase in capital spending in the U.S. over that time frame.

The pace of deal-making and capital investment related to the Permian region had slowed noticeably during the second half of 2017; management teams have focused more capital dollars on programs designed to maximize investor returns. But business activity appears to be heating up once again early in this new year, as the large independents and majors that drill the great majority of U.S. shale wells begin executing projects based on their 2018 capital budgets.

The United States has been truly blessed as a country with a great abundance of oil and gas resource plays. From the Bakken play in North Dakota to the Marcellus in Pennsylvania to the DJ Basin in Colorado to the Haynesville Shale in Louisiana (and so many more), these vast resources underlie much of the lower 48 states and Alaska. And, as these recent major announcements by some of the country’s largest producers show, “Saudi Texas” is clearly the place to be in 2018.