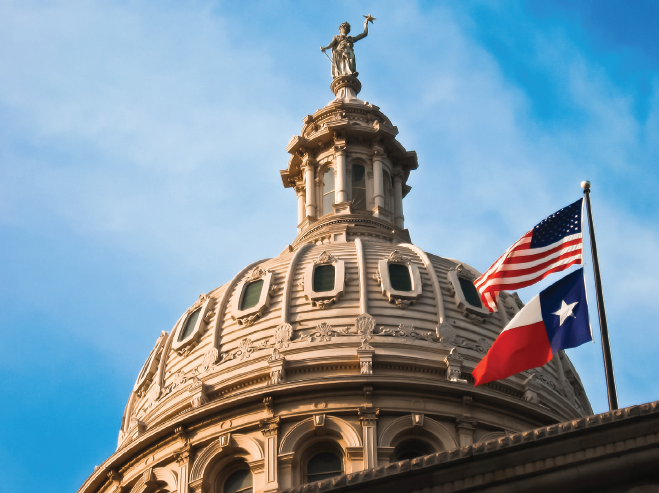 The Texas Constitution requires the Texas Legislature to convene in Austin on January 12, 2021 at noon. Staying with their constitutional obligations, legislators must pass a two-year state budget and apportion the districts for Congress, State Board of Education, Texas Senate and House of Representatives seats as part of the decennial redistricting process.

Past that, it is an open question what will happen under the Capitol dome, affectionately known as the Pink Building, on how lawmakers will address these and other pressing issues. And for the public, what will be the level of involvement and participation for a process that relies on physical gatherings and face-to-face interactions with the backdrop of COVID concerns and restrictions limiting public access to the Capitol. Here is a preview of the 87th Session of the Texas Legislature:

In July, Texas Comptroller Glenn Hegar updated the Legislative Budget Board, led by Lieutenant Governor Dan Patrick and House Speaker Dennis Bonnen, on the fiscal situation for the remainder of the state’s two-year budget cycle. The Comptroller described a decline of $11.6 billion in anticipated revenues for the biennium. The full impact of this was softened by approximately $4.1 billion in savings from both federal stimulus dollars displacing some expenditures and unexpected growth in the local property tax share which reduced the state’s responsibility for public education cost. His estimate reveals a net $7.6 billion swing from the $3 billion surplus the Legislature had at the end of last session to an anticipated $4.6 billion shortfall to finish out this two-year budget cycle.

When the Legislature reconvenes in January 2021, they will work to pass a supplemental budget, which the Comptroller thinks will be very manageable with the 5% cuts that agencies were instructed to make in Spring 2020, existing stimulus dollars and amounts in the Economic Stabilization Fund (ESF) to cover the shortfall. The next budget, for years 2022 and 2023, will be quite a bit more difficult than the one passed last session but the extent to which will not be known until he reports his Biennial Revenue Estimate the day before session starts. Importantly for the oil and gas community, the ESF, which is made up entirely of severance tax collections, will have an estimated $8.8 billion by the end of August 2021.

With that challenging tax revenue picture, there will inevitably be talk of budget cuts or the need to raise revenue. A top priority for the oil and gas industry will be working to make sure the Railroad Commission and the Texas Commission on Environmental Quality have the resources they need to effectively do their jobs.

Both agencies have made tremendous progress thanks to the leadership of Commissioners Christi Craddick and Wayne Christian at the Railroad Commission and Governor Abbott and legislators in properly funding these agencies. More importantly, they have given them the tools to modernize their operations making them more efficient with the taxes and fees they raise from our industry.

Take for example the Railroad Commission, last session the Legislature provided authority for 22 new oil and gas and pipeline safety inspectors; $26.9 million to replace antiquated mainframe permitting system; and $39.1 million to fund a robust well-plugging and site-remediation program according to a release from Commissioner Craddick’s office. Maintaining this progress will be critical for industry because the best defense from any federal intervention in our state’s most important industry is a strong, robust state regulator.

The decennial redistricting process will also be taken up this session as mandated by the U.S. and Texas constitutions. Very few items the Legislature takes up is more partisan or contentious than when legislators draw the lines for Congress, State Board of Education, state Senators and state House members.

On top of these challenging requirements, COVID has delayed the finalization of the federal census causing some areas of the state to take longer to report their final numbers which may delay when lawmakers ultimately receive their final package of census block data from the U.S. Census Bureau.

Outside of fixed obligations in passing the budget and reapportionment, lawmakers from both parties will be weighing in on two of the most polarizing issues today. The first, gun reform, is in direct response to two acts of mass violence in August 2019 in El Paso and Midland-Odessa.

These horrific crimes claimed the lives of 30 individuals, injuring 50 more and prompting immediate action by Governor Abbott to form the Texas Safety Commission which has taken executive action to break down some funding barriers and increase information sharing among law enforcement departments. Both the House and Senate also appointed special committees to draft legislation to implement these changes which build on the successful efforts made over the past several sessions to increase mental health resources and school safety efforts.

The second pressing issue is police reform. Following the death of George Floyd in Minneapolis in May 2020, protests have occurred in more than 150 American cities. Here in Texas, lawmakers from both parties will be supporting the law enforcement community to build public confidence by boosting training and assisting officers with expanded community responses to mental health, recidivism, and drug treatment. There will also be a substantial conversation on the use of force to protect both officers and the public.

Both policy areas may require additional funding to implement the proposals from lawmakers and it is likely they will turn to severance tax collections to jumpstart any initiative. There is a precedent for this. Following the assassination of five Dallas-area police officers in 2016, lawmakers utilized $25 million from the Economic Stabilization Fund to outfit approximately 50,000 Texas officers with vests that can withstand rounds from high-caliber firearms.

The energy agenda for this session will be to continue to keep Texas the best state in which to work and operate in the nation. Yes, we are blessed with good rock, but it takes the pipelines, people and policies to make sure that production can be brought to market. Look no further than New York or Venezuela to see good rock be spoiled by bad politics destroying natural resources and condemning private property rights.

First, associations, like the Texas Alliance of Energy Producers and others, will be working with lawmakers to avoid proposals to raise taxes, impose new or higher fees or shift additional regulatory cost onto the industry or mineral interest holders. The tight budget climate, coupled with the commitments made last session on school finance, will make the budget picture difficult but not impossible.

Moreover, if lawmakers are needing revenue, they should consider whether all energy sources are paying to the level of oil and gas producers. Renewable energy projects in the state do not pay a severance tax to the state like we must do. Those arguing Texas and the U.S. should fully transition to renewable energy sources have offered no plan for how they will fund schools, roads and water infrastructure in the same way oil and gas severance taxes do. For example, electric vehicles are currently not required to pay for the use of roads like gasoline and diesel vehicles must.

Finally, the energy industry is happy to join our friends in the landowner rights community to talk about reform to the eminent domain process. There is no question that the recent expansion of production across the country has led to more demand for pipelines across Texas. We have also seen substantial need for more power lines, highways and municipal infrastructure to deal with the rapid population growth Texas has experienced.

The demand for infrastructure has raised concerns by the landowner community that the process is tilted too far in favor of utilities rather than property rights. Balance is important and that is why oil and gas is one of several industries participating in the Coalition for Critical Infrastructure to put forward reasonable solutions to address specific complaints. Specifically, landowners are asking for more information on projects, common easement terms, and the ability to resolve complaints with right-of-way agents.

We look forward to working with the Legislature to address these issues. Oil and gas producers are natural partners with the landowner community and Alliance members want to see progress made here.

In addition to all of the above, the Texas House of Representatives will be electing a new Speaker of the House on the first day of Session to preside over that chamber and appoint new committee chairs and membership of the committees. Speaker Bonnen chose not to run for reelection.

This critical organizational challenge takes time and will have a profound effect on the shape of the Session as the House works with their counterparts in the Senate and Governor Abbott. As with the likely COVID restrictions, House and Senate leadership will impose on the operation of the Capitol.

Since March, the grounds have been closed to the public, though it is anticipated the doors will be open for the first day of Session. What we will find inside continues to evolve from plexiglass divided committee rooms to limitations on traditional gathering places crucial to interacting with lawmakers, staff and the public on the important issues before the Legislature.

The 87th Legislative Session will be talked about for a long time to come and this Texan is extremely grateful for the men and women that serve there in elected and nonelected capacities. As members of the Texas oil and gas community, we have an obligation to pay attention, stay engaged and carry on the important work to fuel our economy while employing hundreds of thousands of Texans who are invested in the health and wellbeing of this state.

About the author: Jason Modglin brings a wealth of legislative and regulatory expertise to the Alliance as its new President. For the past decade, he has been at the forefront of the most pressing issues for oil and natural gas, from Austin to Washington, D.C.