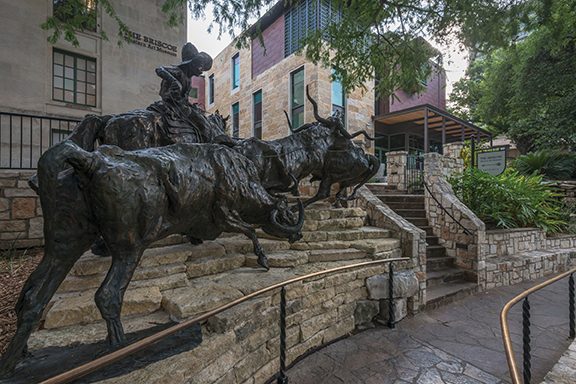 The Briscoe Western Art Museum’s “Night of Artists 20th Anniversary Exhibition and Sale,” on display through May 9, traces its roots to a single evening that not only planted the seeds for the museum itself but also blossomed into the museum’s signature event and fundraiser. The exhibition features the beauty and spirit of the West as captured by the leading contemporary artists in the wide-ranging and often misunderstood genre.

If the name “Western Art” calls to mind cowboys, you’re on the right path. But alongside classic cowboys and even cowgirls, the genre also features scenic landscapes, inspired Native Americans, stunning wildlife and detailed portraiture. And “Night of Artists” deftly showcases it all thanks to a stellar line-up of today’s top Western artists.

But “Night of Artists” is more than just an exhibition. It’s also an auction and sale, and it’s more than just a single night. The seemingly misnomer title stems from those roots as a single evening spotlighting Western Art. The event itself pre-dates the Briscoe, and that’s what makes it so special.

In 2001, a group of Western art enthusiasts created “Night of Artists” to showcase the genre they loved. That single evening sparked the support and funding that ultimately grew to be the Briscoe Western Art Museum. Support from “Night of Artists” helped found the museum, which opened its doors in San Antonio in 2013.

“Night of Artists” is now an essential component of the Briscoe’s annual programming and its largest annual fundraising event. The exhibition, which kicks off with a sale and auction, benefits the Briscoe’s full array of exhibitions, public engagement and educational programs throughout the year, allowing the museum to nurture the understanding and appreciation of Western Art year-round.

The West Starts in San Antonio

The Briscoe celebrates the art, heritage, and diverse history of the American West through its collections, exhibitions and programs. Showcasing the rugged beauty of the West alongside the people and wildlife who call it home, the museum is nestled on the banks of the San Antonio River in the heart of San Antonio’s historic River Walk.

The location is fitting: cattle from across Southern Texas once moved through San Antonio, crossing the San Antonio River not far from where the Briscoe now stands. That history and San Antonio’s location on the 98th meridian fuels the Briscoe’s claim of “The West Starts Here” in San Antonio.

“Western historians generally identify the 98th meridian as the demarcation of the West. And, of course, the movement of cattle and cattle drives helped shape the West. Many cities claim to be the birthplace of the West, but without San Antonio and South Texas, the West as we know it wouldn’t exist,” explains Michael Duchemin, Ph. D., President and CEO of the Briscoe Western Art Museum.

A repository for art and artifacts related to a broad concept of the American West, including paintings, sculpture, Native American art, Spanish and Mexican colonial-era art, Western folk art, artifacts and photography, the Briscoe is named for former Texas. Gov. Dolph Briscoe and his wife, Janey Slaughter Briscoe, who envisioned a museum that would share the story of Western heritage and the people behind that story.

That’s exactly what the Briscoe strives to do. From works by renowned Western artists including Charles Marion Russell and Frederic Remington to contemporary works by Martin Grelle, Allan Houser and John Coleman, whose 2012 “Visions of Change” graces the lobby, the Briscoe spotlights the American West. Favorite artifacts include General Santa Anna’s sword, saddles that belonged to Western icons Roy Rogers and “Buffalo Bill” Cody, as well as Pancho Villa’s last-known saddle and a sixteenth-century silk embroidered Spanish saddle and a Comanchero jacket.

The museum’s collection spotlights the unique genre of Western Art in four pillars, each broadly defining the subjects depicted within the art: wildlife, Native American heritage, cowboys, and thanks to its undeniable influence across Texas and beyond, Spanish and Mexican heritage. Each of the pillars are vividly illustrated by the Briscoe’s interwoven collection of art and artifacts and are on full display in the “Night of Artists” exhibition, where vivid depictions bring wildlife to life inside the museum, while the stories of cowboys and Native Americans are artistically recreated through the skills of the talented artists participating in the exhibit.

Duchemin notes that while “Night of Artists” is a key event for the Briscoe, it also serves to further Western Art as a whole. “The continued support of sponsors, art collectors and enthusiasts is key to growing and preserving the unique genre of Western Art,” he explains. “Helping share these works with broader audiences and spotlighting the vibrancy of the genre overall is an important step in supporting these talented artists and ensuring the genre continues to flourish through their skilled interpretations of the West.”

The success of “Night of Artists” and the Briscoe itself is due to the dedicated support of fans of the genre and generous donors who share the Briscoes’ vision, following their lead in supporting the museum.

“When COVID forced the 2020 in-person event to be canceled, in less than two weeks, the Briscoe successfully shifted the Night of Artists sale online, thanks to the support of amazing sponsors, artists, and collectors we were so fortunate to work with,” explained Duchemin. “We’re honored to have their continued support, making this 20th anniversary even more special.”

From the creation of “Night of Artists” to sponsoring the exhibition’s celebration events and purchasing art through the exhibition, an array of Western art enthusiasts help ensure the future of the genre. Additionally, a number of dedicated supporters lend their time and talent to help better the museum through service on the museum’s board of directors.

Many of the perennial supporters have ties to Texas’ oil and gas industry, including William “Bill” and Margie Klesse, who through the Klesse Foundation support “Night of Artists” as the Western Art Title sponsor alongside Debbie and John T. Montford and the Plum Foundation. John T. Montford serves as the chair of the board, while Debbie Montford and Bill Klesse both serve as directors.

Love of the West runs deep for Jessica Erin Middleton, secretary of the board, who once volunteered as the museum’s executive director as the Briscoe sought permanent staff. Along with her mother, Jan McCaleb Elliott and their family, Middleton and the Elliotts have supported the Briscoe, purchasing art through “Night of Artists” and naming the museum administrative offices “El Bigote Ranch Headquarters” and the museum’s A-Bar Gallery. Fellow board member Richard Nunley, with his wife, Kim, is another “Night of Artists” sponsor, as is McLean Bowman. Through the Ruth McLean Bowers Foundation, the Briscoe’s Ruth McLean Bowman Bowers Woman of the West Gallery shines a light on women’s stories in the West.

The “Night of Artists” public exhibition includes a fixed-price sale featuring works not previously sold. The full catalog may be viewed through the museum’s website, and works may be purchased online or by enjoying the works in person by visiting the Briscoe.

About the author: An award-winning writer and communications expert who runs Tale to Tell Communications, Dawn Robinette loves to tell stories about her adopted hometown of San Antonio. You can read more of her work at Alamo City Moms, San Antonio Woman and Rio Magazine.