With improvements in technology driving down the break-even cost for the production of oil in the rich shale plays of West Texas, the Permian Basin has become more attractive to exploration and production (E&P) companies over the past few years. Since the beginning of 2016, oil production in the Permian Basin has nearly doubled and this trend does not show signs of slowing. Production in the region increased by nearly 30 percent since the beginning of 2018. (Figure 1) This boom in production has caused a supply glut in the region. The rate of production has overtaken takeaway capacity on the various pipelines, trucks and rails, which in turn has put downward pressure on crude prices realized in the Permian. With most of the rail and truck capacity being used to transport the vast amounts of fracking sand being used in the region, the imbalance should eventually be rectified with additional pipelines that are in the works, but they will take time to complete.

Midstream companies are planning expansions and new pipeline construction to help bring all of this additional Permian crude to the U.S. Gulf Coast for refining and export, but the timing of the completion of these projects is not set in stone. Below are a few planned projects with their expected takeaway capacities and completion dates: 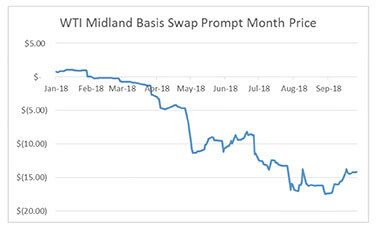 This imbalance of production exceeding takeaway capacity has happened before. In 2014, WTI Midland prices dropped to a $10 a barrel to $15 a barrel discount to WTI Cushing. Then, like now, some companies are benefiting from the market dynamics.

Some larger companies such as Chevron, with the foresight and available capital to anticipate these pipeline constraints, purchased additional pipeline capacity while it was still available and protected themselves from exposure to this current WTI Midland basis blowout. (Figure 2) Another company faring this oversupply situation well is Occidental Petroleum who has been in the Permian for longer than most. By owning their own pipelines and other midstream assets, Occidental has more takeaway capacity than they currently produce. Occidental has reportedly been cashing in on their excess capacity by selling it to other producers or buying Permian oil at a discount and using their own pipeline capacity to transport and sell at higher prices on the U.S. Gulf Coast.

Other companies have tried to limit the impact to their future cash flows by executing financial hedges to lock in a fixed-price differential between WTI Midland and WTI Cushing. By selling basis swaps at a fixed price, these companies are locking in a spread to WTI Cushing for future production. If the basis spread grows in the future, the swap counterparty will pay out the difference between the current spread and their locked-in spread at the time of settlement. However, if the spread narrows to less than the locked-in spread, the company will pay out the difference.

The evolution of the WTI Midland basis swap forward curve would seem to signal that the market has priced in the expectation that these new pipelines will help ease the oversupply issues in the basin and we should see WTI Midland prices much closer to WTI Cushing levels as soon as the end of 2019. (Figure 3) 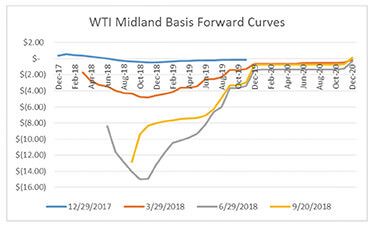 Companies in the Permian Basin will likely continue to produce vast quantities of oil for years to come. Imbalances between production rates and takeaway capacity will likely continue to provide incentive for midstream companies to invest their time and capital to build additional pipeline capacity. The timing between these two moving targets may cause problems for producers in the region in the form of lower realized oil prices in the next few years. It is up to the producers to decide if and how to mitigate this risk through securing pipeline capacity, hedging their position through financial contracts or other strategies.

About the author: Josh Schulte is a Senior Consultant with Opportune’s Risk Advisory Services group, assisting companies with risk management strategy development, hedge execution and derivative valuation. He has a Bachelor of Science in mathematics from the University of Texas at Austin and has a Series 3 Securities License.