Pioneer Natural Resources (NYSE:PXD) announced on April 26 that it was engaged in advanced negotiations to sell the last remaining non-Permian Basin asset in its portfolio, a suite of joint venture properties in the Eagle Ford Shale region of Central Texas. If completed, the transaction to sell the properties to Ensign Natural Resources would complete Pioneer’s two-year transition from a nationwide producer to a pure Permian Basin play.

It’s fair to note that that fact will also have the effect of making the company a more attractive target for a buyout by a larger company in the coming months. With Chevron and Oxy battling to become the acquirer of major Permian producer Anadarko Petroleum, and other majors like Shell, BP and ExxonMobil looking to enlarge their own positions in the Permian region, the industry appears to be headed into a period of rapid consolidation.

In the map pictured above, provided by industry solutions firm DrillingInfo, acreage owned or under lease by Pioneer Resources appears in dark green. The company’s acreage is largely contiguous and concentrated in the Midland Basin in the eastern half of the greater Permian region.

One key attribute that makes one company a desirable takeover target by another is the extent to which both companies own acreage that is contiguous to one another’s. The ownership of large, contiguous tracts of land allows operators cut costs by taking advantage of an array of economies of scale, results in the ability to access the underground resource with the drilling of fewer wells, and enables the distribution of water used in operations from large, centrally-located tanks via flexible pipelines, rather than in hundreds of water-hauling trucks.

In looking at this map, it is becomes quickly apparent that Pioneer owns significant tracts of land that is contiguous to the operations of ExxonMobil (Red), Chevron (light blue) and to a lesser extent, Oxy (dark blue). 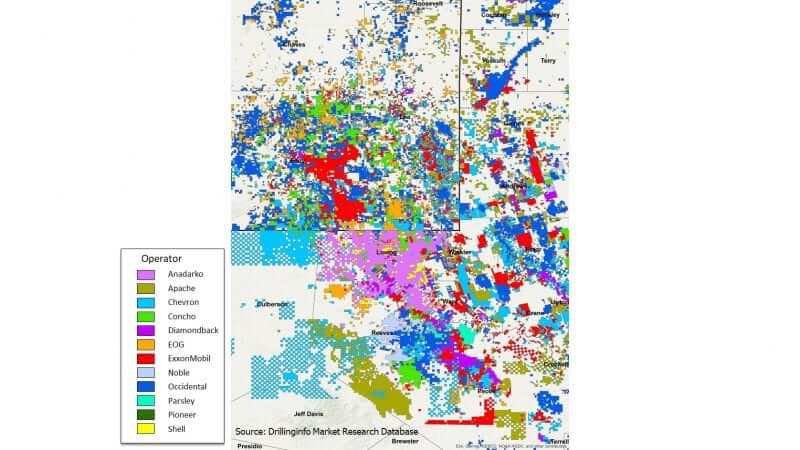 The Delaware Basin, pictured above, which forms the Western half of the Permian region, has recently become the more attractive target area for acquiring companies due to superior well economics. Anadarko’s focus in that part of the play, along with an acreage position that is highly-contiguous to both Oxy and Chevron operations, is the major factor that made it such an attractive takeover target for those two companies. The fact that Pioneer’s position resides in the Midland basin could mitigate its attractiveness as a takeover target.

However, Pioneer’s looming new status as a pure Permian play has a big attraction of its own: Simplicity. It will be far simpler for a big acquiring company to quickly and efficiently integrate a single-play producer like Pioneer into its own operations than it is going to be for either Chevron or Oxy to do the same with a global producer/LNG exporter like Anadarko.

Pioneer’s management has consistently stated that its motivation for moving the company to a pure Permian play is being done for reasons of costs, profits and efficiency gains, and there is no real reason to doubt their word. But regardless of intentions, there can be no doubt that, by achieving that status now, the company makes itself a more attractive target for takeover in the future.

That’s just the nature of this business.