On March 27, 1960, four St. Mary’s University students discovered the largest cave in Texas, located between New Braunfels and San Antonio. As they made their way through a rubble-filled crawlway, they encountered a whole new world — underground.

After carefully walking and crawling through 2 miles of vast cavern passages, they returned to the surface to tell the landowners of their astonishing discovery. Realizing the possibilities, the owners decided to develop what is now the first half-mile of today’s Discovery Tour at Natural Bridge Caverns.

Commercial development began almost two years later in 1962. During excavation of the entrance trail, arrowheads and spearheads dating from 5,000 B.C. were found, as well as jawbones of a species of grizzly bear that became extinct more than 8,000 years ago. On July 3, 1964, Natural Bridge Caverns opened and soon became one of the most treasured natural attractions in Texas, offering adventure on a whole new level. It became a registered U.S. natural landmark in 1971. 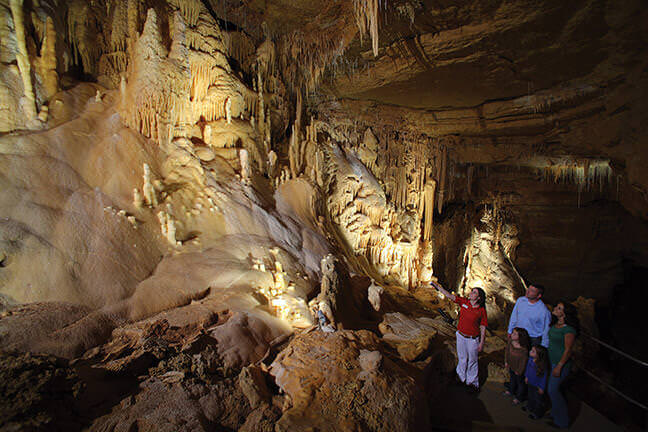 The Discovery Tour goes 180 feet below ground and is the original, most popular cavern tour, introducing guests to a world of natural beauty. The Hidden Passages tour offers another world-class cave, where darkness and shadows play upon delicate structures and around every corner is a mystery.

Natural Bridge Caverns is constantly growing, as tiny drops of water and the slow passage of time form massive, otherworldly formations. These formations retain a luster that is seen in few caverns. Appearing to be made of wax, they are actually as hard as limestone and change from room to room. Maintaining a constant 70 degrees year-round, Natural Bridge Caverns is the perfect entertainment destination.

The Canopy Challenge Zip Lines allow guests to snap into a harness and fly high across the landscape of the Texas Hill Country. Visitors who like testing their balance and fear of heights can visit the Canopy Challenge Explorer Course, where they have 30 minutes to grapple their way to the top of a 60-foot, four-tier ropes course.

A different kind of adventure awaits visitors at ground level, in the AMAZEn’ Ranch Roundup, where twists and turns through a 5,000-square-foot outdoor, timed maze present endless fun. Navigational skills are challenged to hit each checkpoint and find the way out. Guests shouldn’t miss a visit to the Mining Company for some good old-fashioned fun, where mining for gems, fossils and other treasures is just like when miners panned for gold.

After all the adventures, visitors can relax, shop and enjoy refreshments in Discovery Village. There’s more to explore than ever before right now at Natural Bridge Caverns.