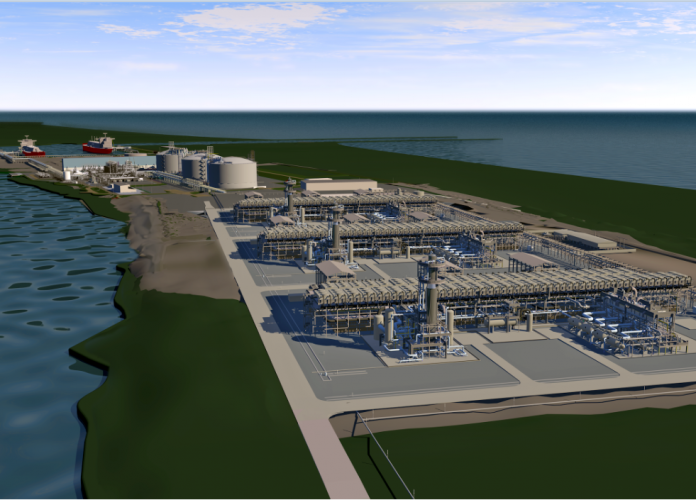 Not long ago, the United States was expected to be a major importer of LNG. But in early 2016 we exported our first shipment. By 2018, 28 countries were receiving shipments of our natural gas. Of those 28, the top five are South Korea, Mexico, Japan, China and India. By 2024, the United States is expected to be the largest global exporter of LNG. What changed our path? The shale revolution. It kicked open the door to American energy independence, and we are not looking back.

LNG is the shortened name for liquified natural gas. Sometimes pipelines are not the most practical way of moving natural gas, such as when transporting it to other countries. In these cases, it is easiest to liquefy the gas first. This is done at an LNG train, a terminal that houses the several processes needed to purify the gas and then cool it to -256°F. When natural gas is cooled to this temperature, it becomes a liquid, taking up 600 times less space than its gaseous state, making it easier to load onto ships sailing to foreign destinations. With the vast increase in exports, the United States has great need for LNG train facilities.

One company stepping up to fill that need is Freeport LNG. It was formed in 2002 to develop, own and operate an LNG terminal on Quintana Island near Freeport, Texas. The company first began importing operations in 2008, and LNG Train 1 went into operation late last year. Already, Train 2 is up and operating. This one has a 20-year tolling agreement with BP.

We are thrilled to now be providing service to BP, in addition to Osaka Gas, and JERA. We are also especially pleased with the performance of our electric motor drive liquefaction units. Freeport’s electric drive motors not only reduce emissions by over 90% relative to other plants that use combustion turbines, they should also require less maintenance with less downtime. The performance test on Train 2 was completed in only 37 days after first gas was delivered to the liquefaction facilities, down from 107 days on Train 1. We are extremely pleased with the current operational efficiency and performance from both trains.

Freeport LNG is not slowing down. Construction on Train 3 is essentially complete. They are just waiting for an inspection by the Federal Energy Regulatory Commission before bringing gas to the facility. Train 3 should be ready for commercial operation by May of this year. The three trains together are expected to produce in excess of 15 million tons of LNG per year. Plus, there are plans in the works for a Train 4.