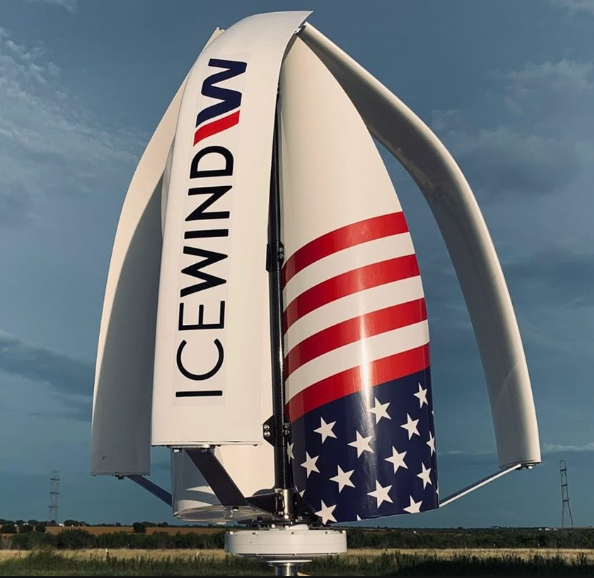 Huge wind turbines are not an uncommon sight these days. Their numbers and effect on wildlife are hotly debated topics. Enter IceWind, a small company in Iceland. They took an old design and remade it for the modern age. The turbines they make are called Vertical Axis Wind Turbines (VAWTs). Rather than large propellers slicing through the air as if they were on the front of a plane (lift turbines), vertical turbines have three or more panels curving around one another that spin around the base pole (drag turbines). There are pros and cons to each system.

A pro for lift turbines is their higher efficiency. This makes them ideal for consumers in need of large quantities of wind power. A huge con are the propellers made of fiberglass. This makes them largely unrecyclable. There are repurposing options in the works, but they are few, and the costs associated with them are higher than most companies can afford. So, to the landfill the propellers go.

The second major con of traditional wind turbines is the effect on wildlife. A 2016 article by the Audubon Society estimated wind turbines “kill an estimated 140,000 to 328,000 birds each year in North America, making it the most threatening form of green energy.” That was 2016, the industry has grown steadily since then. One can then assume the number of bird and bat fatalities is growing along with it.

The pros for IceWind’s VAWTs outnumber those for traditional wind power:

The cons are small, much like the turbines themselves. Standing between five and a little over six feet tall and several feet wide, they will not power entire cities or even towns. IceWind has two lines, residential and stackable. The residential line should be able to power a household all year around. Unlike solar, a residential turbine can produce power on the dark and windy days of winter. In Iceland, the stackable line is used for powering remote cell towers.

We spoke with IceWind

I got to speak with an IceWind representative yesterday. The company has done a great job getting their information out there, but I had a few questions:

SHALE: It’s wonderful that your turbines have such a long and uncomplicated life, and I know they aren’t old enough to have reached the end of their usefulness yet, but when they do, can they be reused/repurposed somehow? Does their simplicity mean there isn’t anything to recycle, reuse, or send to the landfill when their time is done, like traditional fiberglass turbines?

IceWind: The turbine is made out of steel, aluminium and Carbon fiber. Everything but the carbon fiber is reusable so it is quite environmentally friendly. Unfortunately we can not find anything that can replace the Carbon fiber axle at the moment.

SHALE:  You are showcasing your residential model over the Fourth of July holiday in Texas. What can Texans expect from this model for output? It gets hot here. Can it handle running a summer’s worth of household air conditioning?

IceWind: The turbine that we are showcasing is a minimal viable product which means that there will be bigger units. This one can deliver around 160W in 10 m/s, but later there is a plan to release 500W and the 1000W unit. If it is windy they can definitely deliver energy to use for air conditioning. Solar and wind are also a great compilation together.

SHALE: What brought you to Texas as your first American stop? We’re glad you’re here!

IceWind: We have an American investor that came to Iceland and got fascinated by our product. He lives in Austin, Texas, and he is working with us on this launch.  Texas is pretty, and has a long coastline where the wind is usually high. So Texas is a good place to start.

IceWind announced on Facebook when and where you will be able to see their product at work:

The CW100 turbine is now in the United States! IceWind will be hosting a product launch for the CW100 turbine where anyone is welcome to come chat with us, look at the turbine, and learn more.

IceWind plans to have the unit on display at mile marker 39 on the Port Aransas beach in TX from 8am to 2pm on July 3rd and 4th.

We will begin accepting orders later this year!